The Hi-Media Group is an Internet publisher of twenty proprietary websites serving over 50 million unique visitors every month. The company also provides online advertising and electronic payment solutions to more than 280,000 third-party websites.

The photo blogging platform Fotolog is one of Hi-Media’s most popular websites with over 32 million users worldwide. The site allows users to share photos and comments through free and subscription accounts. The majority of Fotolog’s traffic comes from South America and it is a highly ranked social network in both Chile and Argentina.

In 2011, Hi-media transferred site responsibility to the Paris office where the new IT team had to rebuild the Java-based platform in PHP with a PostgreSQL database. In addition to rebuilding the site, the Paris team also made the decision to move the site from the co-location facility to a new hosting provider.

However, the company was under pressure to identify this new host and complete the migration within a six-month timeframe. Complicating matters was the fact that Fotolog had 32 terabytes (TB) of existing photos, and that rapid growth made predicting future server requirements difficult. Yannig Hervé, CTO of Hi-Media Publishing, says, “We knew we needed a lot of space that we could easily understand how to use—fast.”

With storage and server scalability and time-to-market as top priorities, Hi-Media began weighing its infrastructure options. Because the company had operated another blog platform that used Amazon Simple Storage Service (Amazon S3) three years earlier, it named AWS as a top contender. Yannig notes, “We already knew how Amazon S3 worked, and we really liked the simplicity and scale, so we were going to put our photos there regardless of where we hosted the site. Amazon Elastic Compute Cloud (Amazon EC2) had the scalability and low-costs we were looking for and when we looked at the free data transfers between Amazon EC2 and Amazon S3, it made Amazon EC2 the obvious choice for the site.”

Within three months, Hi-Media had created a new Fotolog prototype in AWS. Just three months after that, the production site was launched. Amazon S3 provides primary storage, while Amazon EC2 hosts the site’s web servers and PostgreSQL databases. Within Amazon EC2, the site relies on both Elastic Load Balancing for traffic distribution and Amazon EBS for persistent off-instance storage. 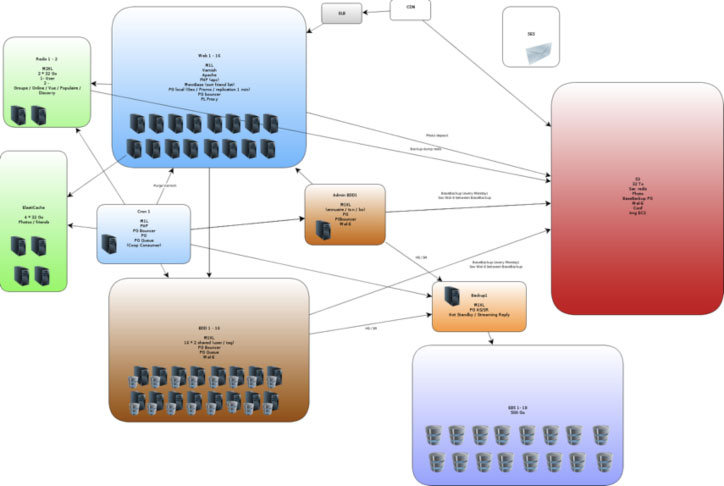 The Fotolog platform now features 1 billion photos and 10 billion comments—and counting. Although these figures may sound daunting, Hi-Media no longer worries about over-extending its resources. In fact, the company is looking to migrate other websites to AWS, in addition to expanding its existing environment to include the new NoSQL database service, Amazon DynamoDB.

According to Yannig, the biggest benefit of AWS is that it allows Hi-Media to focus on growth potential and removes “the need to manage storage scale” even when providing content to tens of millions of website visitors. “We have a lot of potential new and existing projects that would benefit from AWS services.”